Tina is a 13-year-old math genus who lives in her own world where she is obsessed with equations and formulas. Often she drops into a fantasy where her exceptional math abilities combine with her imagination so that the curve of a car might become a fish and a stunning sunset might only appear to her as as an array or gravitational and rotational mechanics. The math is a solid way for her to make sense of an unpredictable world but is also a barrier between her and interacting with others. Math provides solid answers, while liberal arts and human behaviors are not clear. 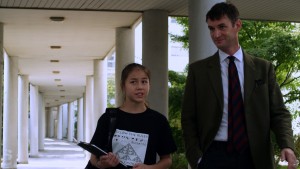 Besides applying her equations and formulas to the material world around her, she even applies her formula to people’s behavior, leading to an advanced form of group theory analysis. Though she excels in her studies, her social relationships suffer. She refers to her classmates and their behaviors as “merely equations that are not even worth solving.” And her dad is the only person she trusts since she sees his reliability as a total mathematical predictability in her estimation.

ANALYSIS / Tina的方程式 on Youku: http://v.youku.com/v_show/id_XOTAzMjkwNTE2.htm
Tina does not realize that the school’s computer lab teacher, Mr, Richardson, has become one of the closest people in her world. Mr Richardson allows Tina to work equations on his computers after school as a part of her complex theoretical analysis and modeling of social structures via math “group theory” at an advanced academic level. She teases him with her sharp and sarcastic wit and he has the strength of character to appreciate her clever wit and return some of his own, happy to find the child is a rare person on his level of mathematical ability.
He recognizes Tina’s withdrawal into her secure math world is leading to isolation from her peers. The school guidance counselor has even expressed concern about the emotional state of the young genius. Tina is however tough in rebuffing Richardson’s suggestion that she should interact with others her own age. But Tina starts to bond with Richardson and tries to win him over to her opinion that, just as a computer can win chess games by reducing the game to formulas, so she can do the same with human interactions and let a computer figure it all out – removing uncertainty and giving solid answers.
Tina ardently resists Richardson’s assertion that social interaction matters and she claims her study in math even proves it does not. Tina holds her own even when Mr Richardson brings up deep philosophical matters like, infinite complexity and chaos theory to debunk her advanced concept of using a form of theoretical math analysis to determine human behavior. Tina brings this debate to a stunning conclusion when she reveals that she based her work on his abandoned research as a professor at Cambridge which he abandoned and casts doubt upon him for being merely a high school teacher in an unimportant Asian high school.
When Tina goes back home, she unexpectedly finds out that her family life that she thought was so secure is being torn asunder. Her parents sudden admission of an imminent divorce causes this emotionally immature girl to withdraw into her world of fantasy.
Next day, Tina has nearly broken down in school and has run out of her classroom. When Richardson learns of this, he rightly guesses that she has retreated into his lab and deeper into her world of math. Richardson sees her fragile side. But he is forceful in challenging her to break down her social wall. He challenges her to analyze her own math research and this leads her to truly discover the meaning of “the human equation.”
She discovers that her model reveals itself to be more about the human interactions and connections than cold math. This leads to her facing her emotional “demons.” Will she choose to open herself to real social interactions with her world and find her own role in society or will she descend deeper into her fantasy world?