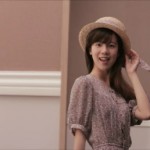 26 February China Independent Film Makers Beijing screening at ZaJia Lab brought nearly 30 people to brave the pollution and rain for the Shanghai Shorts event. We had films from Shanghai Kino Movement members and its founder Vivienne Wei as well as Meiwenti Productions entries. Other shorts included films by Richard Trombly and the high point of the night was Tim Chu‘s ‘s Wednesday Girl (production still below) and Featured short Nighthawks by Lupori Gianpaolo.
Audience members expressed interest in forming a Beijing Kino group and two film makers are starting plans to collaborate on their own next work.
Not a bad way to spend a rainy wednesday night in beijing.
I highly recommend the Zajia Lab and thank them for their support of community film making and for making this great space available.https://www.facebook.com/zajia.lab.beijing.project.space