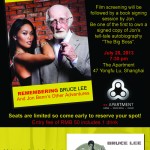 In celebration of his life, his movies and his tremendous influence on that particular movie genre, there will be a screening of The Way of the Dragon at 7.30 pm on July 20th in The Apartment 4th floor study.

This movie, as well as starring Bruce Lee was his directorial debut. On its release in 1972 it set a new Hong Kong box office record and as recently as 2010 it still ranked no 95 in Empire magazines “The 100 Best Films of World Cinema”

What makes this opportunity unique is that you will be watching the movie with Jon Benn, aka “The Big Boss” who played the mafia boss in the movie, shooting many scenes with Bruce he subsequently became close friends with both Bruce and his family.

After the screening Jon will be talking about the making of the movie and answering questions about Bruce in both his professional and personal life. Jon will also be signing copies of his book, The Big Boss – Remembering Bruce Lee and Jons other adventures. Reproductions of the original movie posters will also be available for purchase which I am sure Jon would be happy to sign for you.

Extremely limited seating so either book in advance by calling Mitch on 13761165084, email akaTheBigBoss@gmail.com or arrive early to secure your seat.