​POPCORN AND SHORT FILMS AT THE PEARL​The Pearl is hosting ​some great ​China​-shot ​short films with a number of the directors on hand to introduce their work. Obscure Productions’ own short film ANALYSIS, directed by Richard Trombly will be screened. 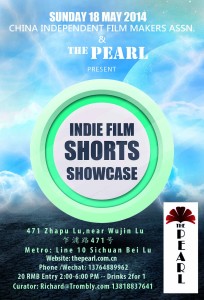